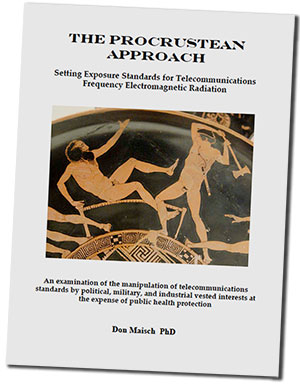 An examination of the manipulation of telecommunications standards by political, military, and industrial vested interests at the expense of public health protection.
Don Maisch PhD, 2010.

According to ancient Greek legend there once lived in Attica a bandit named Damastus or Polypemon, who was nicknamed Procrustes, or “The Stretcher”. He was known to entice, by force if necessary, passing members of the public to lie down on his iron bed. If they were too long he would cut off their limbs in order to fit the bed. If they were too short he would place them on a rack and stretch them until they would fit the dimensions of his bed ”“ referred to as the Procrustean bed. Procrustes was eventually slain by his own method (cover image) by Theseus, a legendary king of Athens who, as a young man, had the habit of slaying robbers and monsters whenever he encountered them on his travels.

One of the derived meanings of Procrustean bed is an arbitrary standard to which exact conformity is forced. It was used to refer to Western radiofrequency (RF) human exposure standard setting by Professor V. V. Parin, a member of the USSR Academy of Medicine and quoted in the Foreword of A. S. Presman”™s book Electromagnetic Fields and Life (1970).

In the case study of the Standards Australia TE/7 Committee: Human exposure to electromagnetic fields (Chapter 5) the central issue of discussion was what constituted a suitable precautionary approach when setting RF exposure standards in order to address scientific uncertainty and provide adequate public health protection. That committee was ultimately disbanded because a suitable definition of a precautionary approach could not be agreed to and the proposed standard was therefore unable to gain the required 80% approval in order to be passed.

This thesis contends that, rather than taking a precautionary approach, Western standard setting organisations have actually followed what can best be described as a Procrustean approach. This approach consists of cutting off from consideration scientific data that does not conform to their bed of knowledge. Such an approach can be considered just as inimical to public health protection as was Procrustes”™ mythical bed for the public of his time.

The above work is supplied free of charge. If you enjoy the read, please consider making a small donation to help support this site.