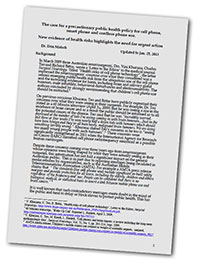 A new report has been released that details a number of important developments suggesting that it is now time to issue public health warnings advising people on how to reduce or eliminate mobile phone health risks. For example:

This report advises people on steps to take to reduce the risks to their health. A central part of this advice is the importance of reducing microwave exposure to the head and body by the purchase of low radiation phones (a low Specific Absorption Rate ”“ SAR ”“ phone) and using a Cellsafe protective case with an incorporated antenna to further reduce SAR levels. See www.cellsafe.com.au